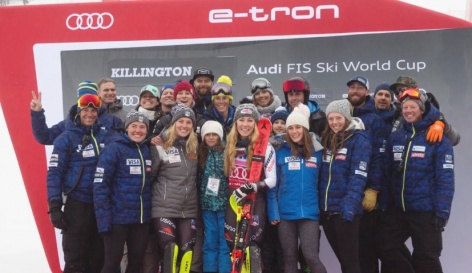 Record-setting Alpine ski racer Mikaela Shiffrin headlined a host of athletes and coaches honoured by U.S. Ski & Snowboard for the 2019 season. Shiffrin was named the winner of the Beck International Award as the top athlete across all sports. U.S. Ski & Snowboard snowboard cross coach Jeff Archibald was named Coach of the Year while freeski coach Ryan Wyble was recognised as the Development Coach of the Year.

“While we had some tremendous athletic success across our sports, Mikaela’s accomplishments this past season were truly unprecedented,” said U.S. Ski & Snowboard Chief of Sport Luke Bodensteiner.

“This past season still feels like a dream to me,” said Shiffrin. “Winning one World Cup is no small feat – but sustaining that level of excellence 17 times wouldn’t have been possible without the tirelessly hardworking and supportive group of people I am honoured to call my team. A special thank you goes out to all of the club coaches and volunteers out there who pour themselves into their work for the love of the sport, in order to make dreams come true,” she added. “I was one of those kids in the past and I wouldn’t be here without all that kind of support.”

Archibald, a former international competitor himself, has built one of the strongest snowboard cross teams in the world leading his athletes to 112 World Cup podiums including 40 wins, plus four Olympic medals. This past season his athletes rode to five World Cup podiums and won double gold at the World Championships with Mick Dierdorff taking men’s gold and then teaming with Lindsey Jacobellis to win the first mixed gender team event.

Wyble, the head freeski coach at Park City Ski & Snowboard, has developed athletes at all levels in his eight years coaching. This past season he had six athletes named to Junior World Championship teams. Most notably, he has distinguished himself by extending his leadership on the regional and national level.

“Recognition of coaches for their accomplishments is a vital part of our education and certification process,” said U.S. Ski & Snowboard Director of Sport Education Gar Trayner. “Our overall and sport coaches of the year have set an outstanding example for others as role models.”