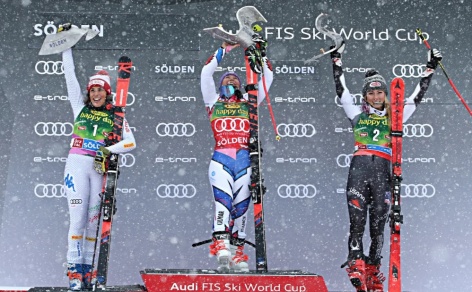 Let the games begin.. in Sölden!

It’s the final countdown. With less than 10 days left until the World Cup Opening in Sölden, following Thursday’s positive snow control, FIS race director Markus Mayr and the chief of course Isidor Grüner  gave the green light for the first ski races of the season. As excitement is building up, the greatest alpine ski racers in the world are getting ready to return to the Rettenbach glacier for a weekend of thrill, where they will find perfect snow conditions.

"The slope preparation took us very long time. Luckily we have had good temperatures for snow-making and at the moment we have great conditions for the training. Now we will work subtly with water to create ideal and fair racing conditions for Saturday and Sunday" said Isidor Grüner.

The 2019/20 Audi FIS Alpine Ski World Cup Season is now ready to kick off on Saturday 26th October in Sölden with the women’s giant slalom, followed by the men’s race on Sunday.  The traditional appointment in Sölden acts as the official season opener and is one of the few venues that features both men and women races during the same weekend. Thanks to its more than 3,000 metres of altitude, the Rettenbach glacier mostly grants perfect snow conditions despite the early season.

The competition promises to be very interesting with Mikaela Shiffrin eager to defend her title against giant slalom veterans such as Tessa Worley, Viktoria Rebensubrg and Federica Brignone. On the men’s side, it looks even more exciting with many competitive athletes willing to fill that empty left by Marcel Hircher after his retirement.

Enjoy some of the best shots from last year’s women race in the slideshow below and see you in Sölden!