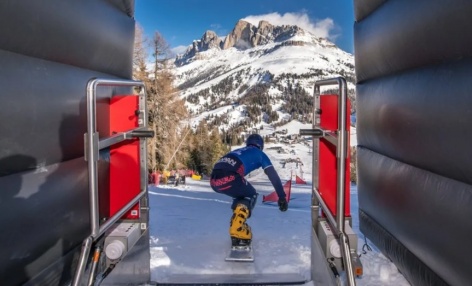 The Italian resort of Carezza will provide an eco-friendly environment for the FIS Snowboard Alpine World Cup parallel races on 19th December.

Carezza is a UNESCO World Heritage Site and features a snow-making system capable of covering the entire ski area to a workable depth in just 80 hours once temperatures drop to -10 degrees. An ideal slope situation and careful maintenance of the area can ensure suitable snow conditions through to March or early April.

Carezza is also using digital communications to reduce paper waste, in addition to offering reusable tableware and the ability to switch lifts off when there are not as many people on site.

"Carezza is a location with an optimal snow-making system, and we would like to export the 'green' project of Carezza to our other venues around the world,” said FIS Snowboard assistant race director Peter Krogoll.

Organising Committee President Andreas Obkircher added: "The race is scheduled a week later than usual and we are proud of our 'green' initiative.”

The Opening Ceremony of the FIS Snowboard parallel giant slalom World Cup Carezza is scheduled for 18th December. Qualification action begins the following morning with finals scheduled for the afternoon.