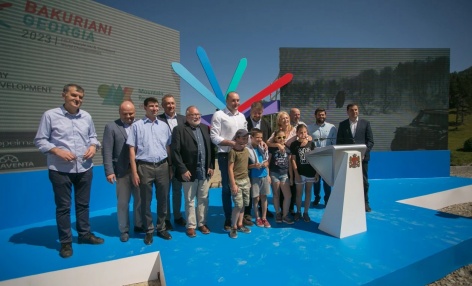 Three new lifts to be installed in Bakuriani

Three new ropeway lifts with a total length of 5 km will be installed in the Didveli area of Bakuriani, the host resort of the 2023 FIS Freestyle, Freeski and Snowboard World Championships.

The cooperative agreement has been signed at the official event on Wednesday, August 14 between the Mountain Resorts Development Company of the Ministry of Economy and Sustainable Development of Georgia and the Austrian-Swiss Company Doppelmayr/Garaventa Group, which will carry out the construction work.

Mamuka Bakhtadze, Prime Minister of Georgia, along with Natia Turnava, Minister of Economy and Sustainable Development of Georgia, and other government officials spoke to the audience about the importance of hosting the FIS World Ski Championships as well as other big sporting events.

“As an ordinary Georgian, I am very proud that Georgia will host the 2023 FIS Freestyle, Freeski and Snowboard World Championship,” said Bakhtadze, also pointing out that this is a huge victory and responsibility for Georgia.

Bakhtadze then talked about the significance of the project for development of Georgia’s mountain regions. He also expressed his gratitude towards the International Ski Federation and other international partners to put trust in Georgia and to recognise its strategies of winter resort development.

In 2019/20 winter season Georgia will host its first FIS World Cup event in Tbilisi, with the aerials competition slated to go down in the country’s capital on February 15, 2020. Georgia has also applied to organise the 2025 Youth Olympic Winter Festival in order to gain necessary experience and prepare for even more ambitious goal - to host the Winter Olympic Games in the future.

“The construction of three new ropes is the first project of our program to carry out world-class international sport events in Georgia,“ said the Minister of Economy and Sustainable Development of Georgia, Natia Turnava. “We plan to create additional infrastructure - these are new ski areas, biathlon area and ice rinks. It is also very important to rebuild the trampoline jump infrastructure that has been destroyed for 40 years and to restore this sport in Koba Tsakadze’s homeland. We will be fully prepared to host the largest winter sport events in compliance with the international standards.”

Furthermore over the weekend, the Municipal Development Fund of the Ministry of Regional Development and Infrastructure of Georgia announced that the Bakuriani Bypass road is in its finale phase of construction and is scheduled to be opened by the end of the month. Soon the 3-km-long bypass road will take the drivers around the main resort directly to the Didveli ski area, reducing traffic jams and making the route to the mountains safer and much more comfortable for both locals and tourists.