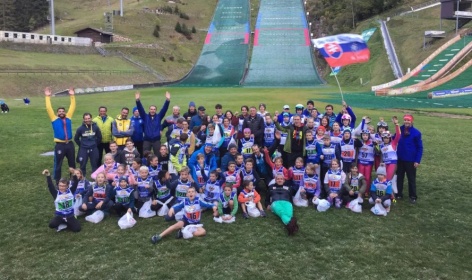 A new edition of the FIS Development Project Camp in Ski Jumping and Nordic Combined has been staged in Val di Fiemme (ITA).

Four years after the last camp took place in Predazzo, the initiative returned to the Italian venue that will host the Olympic Winter Games in 2026. The complex has five hills (HS22 – HS32 – HS66 – HS104 – HS135) and the participants had the opportunities to train on of the different sizes.

Nine nations were present: Belarus, Bulgaria, Estonia, Georgia, Latvia, Romania, Serbia, Slovakia and Hungary and a record-high number of 45 athletes participated, accompanied by 15 coaches to Italy. Five members of the FIS Development Camp staff worked to create an amazing atmosphere for the participants.

The jumping sessions were the highlight of the camp. The motivated athletes were able jump in two sessions each day and used the opportunity to build their personal “Olympic Dream” for the Olympic Winter Games 2026.

For the participants aged 13 to 20 years, it was a great chance to increase their skills and motivation to work for the future. And because the German Ski Jumping national team members Markus Eisenbichler, Karl Geiger and Richard Freitag were also training in Predazzo at the same time, the youngsters had a chance to watch the best of the best in action and learn from them as well.

During the camp, several seminars were provided to the coaches: equipment for ski jumping, acrobatics and development of an organised system for National Ski Associations were the main topics discussed.

The training week was completed with an open competition on the HS 22, HS 32 and HS 66 jumping hills, which also involved ski jumpers from local ski clubs. For some, the event was their first-ever international competition. The next FIS Development Camp Ski Jumping / Nordic Combined will be organised in January 2020.