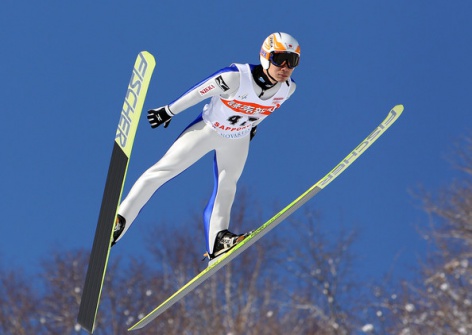 New features in Nordic Combined COC 2012/13
The FIS Nordic Combined Continental Cup series has again been marked by exciting competitions and a high level of organisation throughout the 2012/13 season.

Just as at World Cup level, a German captured the crystal globe in the Continental Cup series. After placing third in the overall rankings already in 2009, 25-year-old Andreas Guenter took his maiden overall title with 698 points this season. Harald Lemmerer (21) from Austria was his closest competitor, 149 points behind, followed by Truls Soenstehagen Johansen (21) of Norway who collected a total of 485 points.

For the first time this winter, the Continental Cup which enables younger and developing athletes to prepare for the World Cup level included a new format in the final Individual Gundersen competition featuring two jumps and 15 km of cross-country skiing. In addition, a green bib for the overall leader has been introduced.

Toni Guggemoos, FIS Continental Cup Coordinator Nordic Combined explained: “Overall, I received a lot of positive feedback about the final Individual Gundersen competition as well as the leader bib. The athletes praised the opportunity to have another different experience on the competition calendar and accepted the new leader bib very well. In addition, the constant high number of participants underlined the continued satisfaction with the Continental Cup series”.

Next to the “new” format and leader bib, the past season also featured an exciting mix of new and traditional venues. Starting from 14th -19th December in Soldier Hollow-Park City (USA), the series visited seven different stops on its way to the final competitions in Finland’s Rovaniemi from 15th-17th March. Next to the traditional venues of Klingenthal (GER), Eisenerz (AUT) and Høydalsmo (NOR), the season included competitions in Chaikovskiy (RUS), Örnsköldsvik (SWE) and Planica (SLO) for the first time.

“The season was excellent all-around! For sure, we were lucky with the weather and had pretty good snow conditions everywhere, but the local Organising Committees also did a good job in preparing the sporting facilities. I would like to thank them all for their hard work and commitment”, Guggemoos concluded.