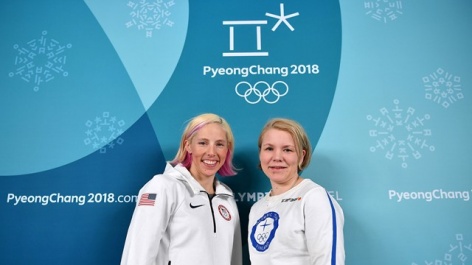 Emma Terho from Finland (ice hockey) and Kikkan Randall from USA (cross-country skiing) have been elected to the International Olympic Committee (IOC)’s athletes’ commission by their fellow olympians at the Olympic Winter Games PyeongChang 2018.

With a record participation rate of 83.86 per cent, athletes at the Olympic Winter Games made their way to the voting booths in the Athlete365 Space in both the PyeongChang and Gangneung Olympic Villages to cast their votes. Terho was elected with 1,045 votes, followed by Randall with 831 votes.

The announcement was made today at the Olympic Village by IOC Executive Board Member and Chair of the Election Committee Nicole Hoevertsz, Swedish IOC Athletes’ Commission member Stefan Holm and IOC Sports Director Kit McConnell.

Terho represented Finland at five Olympic Winter Games, winning bronze at Nagano 1998 and Vancouver 2010. Randall, meanwhile, is currently competing in her fifth Winter Games in PyeongChang. Earlier this week, she won the USA's first-ever Olympic gold medal in cross-country skiing, after topping the podium in the team sprint event alongside Jessica Diggins.

Following approval by the IOC Session, to take place on the last day of the Games, Terho and Randall will become Commission and IOC Members for an eight-year term, representing their fellow Olympians on the IOC Athletes’ Commission, which serves as a link between the athletes and the IOC.

They will replace current IOC Athletes’ Commission Chair Angela Ruggiero and Adam Pengilly, whose terms are finishing following their election at the Olympic Winter Games Vancouver 2010.

Prior to the start of the Olympic Winter Games PyeongChang 2018, Kirsty Coventry was appointed as the incoming Chair of the Athletes’ Commission following a vote of confidence from her fellow members.

Coventry has been a member of the IOC Athletes’ Commission since 2012, and has played a significant role in developing the Commission’s new strategy, which was presented by the current Chair, Angela Ruggiero, at the International Athletes’ Forum last November.

Also confirmed recently was the appointment of Danka Bartekova as the Vice Chair of the Commission. Bartekova has been instrumental in the delivery of Athlete365, a new overarching brand that brings together all the IOC athlete-focused communication strands.