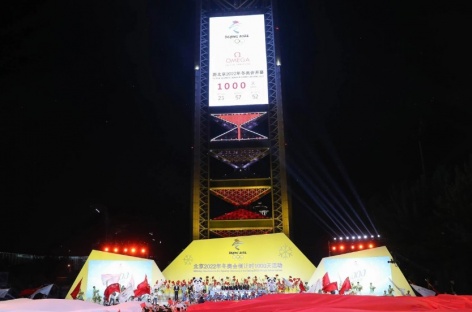 Beijing 2022 celebrated 1,000 days to go the opening ceremony of the XXIV Olympic Winter Games in grand fashion, with a ceremony at the Linglong tower on the Beijing Olympic Green.

During the celebration, actor Jackie Chan, Olympic gold medallist Wu Dajing, para snowboarder Pang Qiaorong and International Olympic Committee Vice-Presidents Juan Antonio Samaranch and Yu Zaiqing joined Cai Qi, Secretary of the CPC Beijing Municipal Committee and President of Beijing 2022, at Linglong Tower to unveil a large screen that started counting down to the Olympic Winter Games.The screen spans from the fourth to the seventh floor of Linglong Tower, which served as a broadcasting facility for Beijing 2008 and will again for Beijing 2022.

In front of hundreds of student volunteers, the volunteer service action plan was unveiled, outlining the major components of the volunteer programme. Chinese Olympic gold medallists Yang Yang, Zhang Hong, and Han Xiaopeng, sprinter-turned-skeleton slider Zhang Peimeng, and actors Wu Jing and Tong Liya went on the stage to encourage people from all over the world to participate as a volunteer in the programme, which will be officially launched in December 2019.

With the eyes of the world now firmly on China as the next host of the Olympic Winter Games, Beijing 2022 has made strong progress in its preparations, especially in the role that it is playing in China’s ambitious plans to engage 300 million people with winter sports.

During the ceremony, major Chinese singers performed for the audience with kindergarten children and school and university students, as well as dancers from the Chinese Disabled People’s Performing Art Troupe.

A variety of events — including sporting competitions, performances, art exhibitions, volunteering drives, a photo contest, a flash mob and a marathon — have been planned for the weekend of 11-12 May to celebrate the 1,000-day countdown in Beijing, Yanqing and Zhangjiakou, as well as cities like Shijiazhuang and Qinhuangdao.