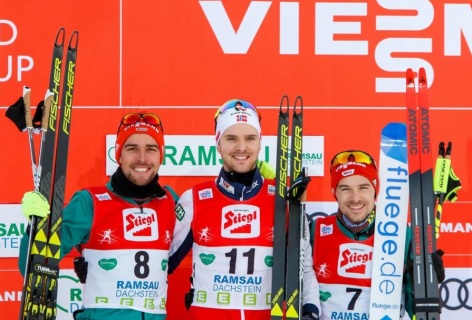 Even though difficult conditions were forecast for the qualification and competition round, the wind quieted down a bit and allowed both rounds to be carried out according to plan. Disaster still struck for World Cup leader Jarl Magnus Riiber, who was first stopped by snow falling into the track. When the inrun was cleaned and ready to be used again, Riiber approached his jump aggressively and his flight system got out of balance shortly after the takeoff. Only an acrobatic movement kept the 21-year-old from crashing but of course all his chances for a good result on this day were gone. Riiber did not start the cross-country race.

In his absence, Poland’s Sczcepan Kupczak crowned his great jumping performance with his second jumping round win (the first one in a competition round). A jump of 92 metres was the top distance of the day and with 120.4 points, Kupczak started his race eleven seconds ahead of the young German Terence Weber and 18 seconds ahead of local hero Franz-Josef Rehrl (87.5 m, 115.9 p.).

Espen Bjørnstad and Mario Seidl had strong jumping results as well, occupying the fourth and fifth positions but fans of the sport were sure that with a German phalanx of Vinzenz Geiger (tied with Seidl), Fabian Rießle and Johannes Rydzek following on positions six and seven and only 20 - 30 seconds to make up, the podium would have to be contended with these three athletes.

Local hero Franz-Josef Rehrl again skied a strong race and with good skis, he was the leading man of the lead group in the decisive phase of the race on the last lap. Before that, Vinzenz Geiger, Fabian Rießle and Johannes Rydzek alternated in keeping the tempo high. Also fixtures in the lead group were Akito Watabe, Espen Bjørnstad and Mario Seidl, as well as Terence Weber and Jørgen Graabak.

When push came to shove in the last part of the last lap, Rydzek and Rießle attacked and only Graabak could match. Flying towards the final stretch, the three athletes fanned out with Graabak deciding to the take outside side of the turn and the right of the three lanes. There he flew past Rydzek and Rießle who had to concede defeat shortly before the finish line.

Behind the sprinting trio, Akito Watabe battled to the fourth position, Vinzenz Geiger was fifth, Espen Bjørnstad sixth, Terence Weber seventh and Mario Seidl eighth. Franz-Josef Rehrl ran out of steam in the last metres of the race and finished ninth. Alessandro Pittin was the fastest skier of the race and earned a Top Ten finish for his efforts on rank 10.