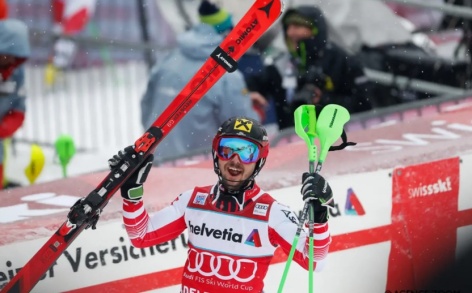 The love story between Marcel Hirscher and Adelboden continues

The slalom showdown from Adelboden took place today unter continuous snowfall but whatever the conditions, Marcel Hirscher seems to master the Chuenisbärgli the best. He took his 67th World Cup win ahead of Clément Noel and Henrik Kristoffersen.

Like in the last Audi FIS Ski World Cup in Zagreb, Marco Schwarz laid down the fastest second run but couldn't bring it down in the second leg. This opened the door for the podium, and as usual Marcel Hirscher pushed hard to ski the fastest splits from top to bottom in the second run. This allowed him to celebrate a 9th World Cup win and a 16th podium in Adelboden, a record among male athletes.

But also other contenders grabbed the opportunity and Clément Noel is one of them. Two 4th places on the World Cup Tour, and a sensational 4th place at the Winter Olympic Games in PyeongChang, the young French athlete confirms and claims his career first World Cup podium, by finishing in second place in Adelboden.

In second place after the first run, Henrik Kristoffersen managed to stay on the podium despite a mistake in the upper part and earned the third place of today’s race. It’s his 5th slalom podium on the Chuenisbärgli, a personal record for him. But the Norwegian star is eager to find the top spot of the podium again. His last win came in the slalom in Kitzbuehel, one year ago.

The next stop on the men’s World Cup Tour are the Lauberhorn races in Wengen. A first training is scheduled on Tuesday, and another training will be held either Wednesday or Thursday, depending on the weather conditions. After this training period, racing will resume on Friday with an alpine combined, followed by the traditional downhill on Saturday and a slalom on Sunday.

Quotes from the Top 3 are available here: Soundcloud