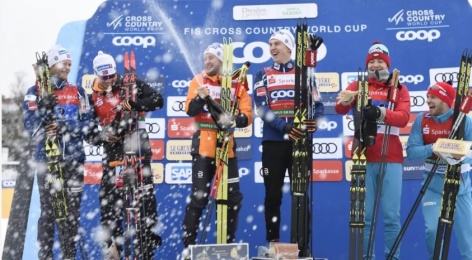 For the second time ever, the city of Dresden (GER) hosted a FIS Cross-Country World Cup.

On the second race day along the banks of the Elbe river, spectators were rewarded with fast races along the 1.6km course. However, with narrow groups and head wind the goal for each team was clear: ensuring their positions in the leading positions and avoiding being caught in a tricky situation where one could fall or get tangled up.

On the ladies sprints, the top sprinters of this world made once again a clear statement and not only impressed with strenght and speed but also with tactical skiing.

Team Sweden 1 with Stina Nilsson and Maja Dahlqvist performed at its best and finished +1.11 second before Team Sweden 2 with Ida Ingemarsdotter and Jonna Sundling. On the third spot landed Team Norway 1 with Mari Eide and Maiken Caspersen Falla by a photo finish with Team USA 1 and Team Switzerland who finished on the 5th rank, only +2.02 seconds behind their colleagues from the US.

On the mens side, Team Norway 1 with Erik Valnes and Sindre Njørnestad Skar ensured their win on a tight +0.75 second margin before the rest of the podium was decided on a photo finish including 4 nations! Team Norway 2 with Pål Goldberg and Eirik Brandsdal was ranked on the 2nd position, only +0.05 seconds before Team Russia 1 with Artem Maltsev and Gleb Retivykh. Switzerlands Roman Schaad and Jovian Hediger ended on a bitter 4th place, +1.01 seconds behind the leaders, followed by Team Russia 2 with Andrey Krasnov and Alexander Terentev.

With their home crowd cheering for them, the ladies team Germany 2 qualified into the finals with ease. Team Germany 1 with Sandra Ringwald and Victoria Carl also showed a strong performance in the semifinals, guided by the motto "who dares, wins". Carl thus led the german team into lead but due to an unfortunate fall of Ringwald in the final lap, team Germany 1 did not qualify for the finals.