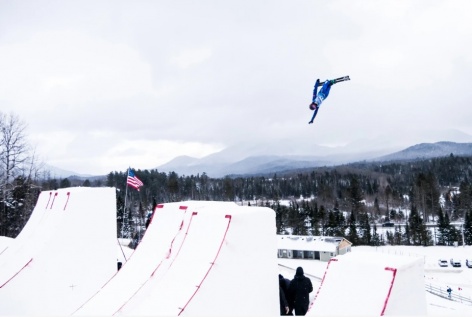 After an entertaining competition in 2019 in Calgary last week, the FIS Freestyle Ski World Cup now moves from one classic venue to another, as we head down to the USA where aerials and moguls competition are set to go down this weekend in Lake Placid.

One of the most important and iconic venues in skiing, Lake Placid is set for back-to-back days of competition this weekend, beginning with moguls on Whiteface Mountain on Friday and finishing up with the aerials competition under the lights at the Olympic Jumping Complex on Saturday night.

Lake Placid has been a stop on the Freestyle Ski World Cup for over 30 years, with the first moguls and aerials competitions held in 1985 at the former Olympic venue. Besides being one of the longest-running venues in Freestyle, Lake Placid serves as the home of the USA’s Olympic Training Center for many sports including freestyle skiing, sliding sports, and biathlon. Lake Placid bills itself the “Winter Sports Capital of the World,” and it just might be right about that.

The event in Lake Placid will be the fifth competition in 2018/2019 season for moguls athletes, while it will also serve as a season kick-off for the aerials World Cup tour.

Ahead of Friday’s moguls competition it is the 2018 Olympic golden duo of Perrine Laffont (FRA) and Mikael Kingsbury (CAN) sitting atop the respective ladies’ and men’s leaderboards.

After four stops into the season, Laffont owns the yellow World Cup leader bib lead with 320 points, followed by the double winner from Thaiwoo (CHN) and top US competitor Jaelin Kauf in second with 305 points, while Yulia Galysheva (KAZ) sits not so far behind in third with 290 points.

Galysheva is coming straight off a big victory on a difficult course and in challenging conditions in Calgary, where she made a clear statement that she’s joining the race for the 2018/2019 moguls crystal globe.

Kingsbury on the other side leads the men’s ranking with a perfect 400 points after taking four straight victories so far this season and keeping a comfortable advantage of 170 points over second in the ranking Benjamin Cavet (FRA).

Having what looks like a break-out season is Walter Wallberg (SWE) who sits currently in third place with 200 points, while Kingsbury’s biggest rivals from last season - Ikuma Horishima (JPN) and Dimitriy Reikherd (KAZ) - find themselves on fourth and fifth spot with 188 and 156 points, respectively.

The moguls competition start on Thursday, January 17 with qualifications at 9:45 LOC. The finals are slated to go down on Friday, January 18 at 11:00 LOC.

As the aerials World Cup season is just about to kick off with its first of five competition, it’s hard to predict who will contend for a spot on the podium here in Lake Placid.

However based on the last year’s results there is a couple of names that everyone should keep an eye on when looking for favourites in Saturday’s finals under the lights.

Over on the men’s side of event we have the last year’s World Cup winner Maxim Burov (RUS), the 2014 Olympic gold medallist Anton Kushnir (BLR) as well as his teammate Maxim Gustik (BLR), not to forget about the 2018 Olympic champion Oleksandr Abramenko (UKR) and Maxim Burov’s older brother Ilia, who wrapped up the past season with a bronze Olympic medal in PyeongChang.

And while just those names mentioned above guarantee an exciting competition in Lake Placid, there is plenty of young guns waiting to seize the opportunity and make a name for themselves. Coming into the new Olympic cycle, with some of the former champions pulling back from competitive skiing, the chance to shine is right there and we’re more than sure that we won’t be waiting long for a new aerials talent to shake up the scene.

The aerials competition gets underway on Saturday with the qualification round at 14:40 LOC and the finals taking place under the lights at 19:00 LOC.