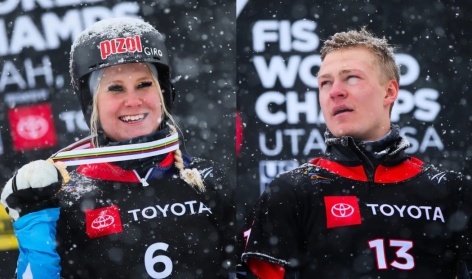 Park City (USA) - Alpine snowboard competition at the Utah 2019 FIS Snowboard, Freestyle and Freeski World Championships wrapped up on Tuesday with an exciting -  and snowy - parallel slalom race, where Switzerland’s Julie Zogg claimed her first world championships title and Dmitry Loginiov of Russia became the third man in history to sweep world championships alpine snowboard competition with his second gold in as many days.

Heavy snow blanketed Park City Mountain on Tuesday, forcing the postponement of the majority of the day’s scheduled competitions. However, PSL competition went on as scheduled, with the world’s best carvers battling hard for the Utah 2019 podium.

Finishing in fourth in the morning’s qualifiers, Zogg had no easy route to the big final, facing Monday’s parallel giant slalom silver medallist Natalia Soboleva (RUS) in her 1/8 final heat, then Sochi 2014 Olympic PGS champion Patrizia Kummer (SUI) in her quarterfinal matchup, before dismissing Maria Valova (RUS) in her semifinal heat to punch her ticket to a final showdown against dark horse competitor Annamari Dancha of Ukraine.

Though Dancha lead the big final through the top half of the course, Zogg remained calm and collected behind her, gradually reeling the Ukrainian in through the bottom pitch and crossing the finish line .85 seconds ahead for the gold.

“Today wasn’t the best conditions for me to race in, but I did do the best in this race, and it’s just unbelievable,” said Zogg from the finish area, “Now it’s the time to relax for a few days…we’re heading to Hawaii tomorrow!”

The ladies’ small final saw Valova up against Ramona Theresia Homfmeister (GER) in a bizarre heat that saw Hofmeister jump out to a huge lead, only to crash near the middle section of the course. However, not missing a gate, she was able to pick herself up, get back up to speed, and best Valova to give Germany the first of what would be two bronze’s on the day.

In the men’s competition is was the incredible 19-year-old Loginov earning his second gold medal of the Utah 2019 world championships, just one day after claiming the PGS title. And, as he did with his PGS win on Monday, Loginov once again made history as the youngest-ever PSL world champion, and once again became the first men’s alpine rider ever to simultaneously hold the junior PSL and world PSL title.

On top of this, Loginov became the first alpine snowboarder in history to hold all four of the PGS and PSL junior and world titles simultaneously.

Riding in the challenging red course, Loginov put down what was likely the greatest run of the Utah 2019 world champs, charging out to an early lead and steadily pulling away from the 38-year-old Fischnaller through the top half of the course.

Feeling the pressure to keep up, Fischnaller made a critical mistake in the course’s middle section and missed a gate, pulling up short and being forced to watch down the course as Loginov crossed the line for PSL gold.

“The strategy on a day with weather like today is the same as any other race - push as hard as you can every gate and go for it. Unfortunately I made a mistake and it didn’t work out, but the silver medal is always nice. I’m happy with my day.”

The battle for bronze went down in a small final that featured Sarsembaev and Stefan Baumeister (GER), with Baumeister emerging victorious for his second third place finish at Utah 2019, giving the German squad four total medals from Utah 2019 PGS and PSL competition.