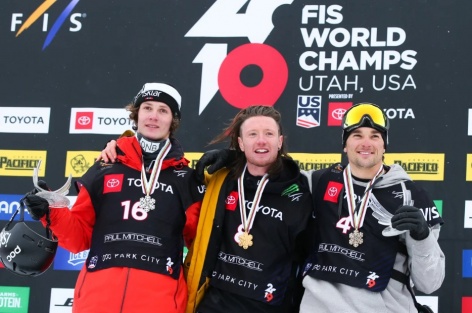 Wednesday’s men’s competition took place following a couple of down days in Park City, where heavy snowfalls and high winds made it extremely difficult to run the slopestyle competition in a safe manner. However, with the Utah 2019 Organising Committee and the Park City Mountain Resort making their best efforts to find room in an already tightly packed schedule the qualifications, which were originally scheduled for Tuesday, had been moved to the next day with hopes that Mother Nature would play along for a successful world championships event.

However, again on Wednesday morning the conditions were harsh, as over 30 cm of fresh snow had covered the course overnight. A huge effort was made by the course crew and the large and dedicated group of volunteers to get the course in shape, though intermittent gusts of wind and the snow conditions created speed issues and forced the competition to be on standby early in the day.

Finally it stared to clear up, and the first riders dropped in shortly before midday to fight for one of ten spots available in the finals. And, when the qualifications, were through it was time for the big show to go down at Park City.

Though things started slowly in run one as athletes struggled to put down clean runs, run two and three brought major improvements and some truly exciting riding, as the finalists started stepping things up and putting down solid runs.

At the end of the day it was Great Britain’s James ‘Woodsy” Woods who was able to stomp a determined second run for the highest score of the day, giving the 27-year-old the full spectrum of world championships medals after he earned silver in Voss 2013 and bronze at Sierra Nevada 2017.

“It feels good. Obviously, I couldn’t be more proud,” Woods said. “I’ve put a lot of effort in over the years as everybody has. And the crowd was bumping! It was nice that so many people came out because it’s cold. It’s been dumping so there’s plenty of skiing opportunities so it’s good that everybody came out. I appreciate that a lot.”

Second place went to the 19-year-old Birk Ruud of Norway, with the US double Olympic medallist Nicholas Goepper rounding out the podium in third.

Unfortunately with several postponement of the competition programme there was simply no time left on Wednesday for ladies to drop in. Despite all efforts from the Utah 2019 organising committee, Park City Mountain, and the FIS, it was impossible to reschedule the ladies’ competition and thus the event has been cancelled.