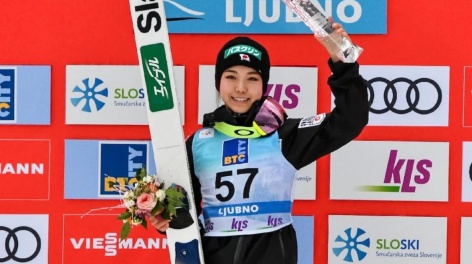 It was a windy day for the third and final ladies' competition in Ljubno (SLO). First, the qualification had to be canceled due to the changing winds, all 59 athletes took part in the first round. Then the difficult wind conditions caused several gate changes and delays during the two competition rounds.

But Sara Takanashi seemed to be totally unimpressed by the weather conditions and took her 56th World Cup win. With jumps of 89.5 m and 82.5 m, the 22-year-old won ahead of Maren Lundby (82.5 m and 85 m) and Juliane Seyfarth (85 m and 86 m). "I am so happy to finally win a World Cup competition this season. It was a difficult and long day, but I tried to stay focused and concentrated on my technique. I would like to thank all the fans and our team for their support. I am really looking forward to the competition on the big hill in Oberstdorf next weekend", the Japanese said after her long-awaited win.

"I am happy with today’s result. I managed to deliver two strong jumps, Sara was just unbeatable today," said the second-placed Maren Lundby, who praised the jury. "It was a long and difficult day but I am happy that we had a two-round competition in the end. I think the jury did a great job today."

Like Takanashi and Lundby, Juliane Seyfarth was happy about her performance as well and she is also looking forward to the World Cup at home next week: "I am very happy to be back on the podium, I think I had two good jumps. The conditions were difficult, but the jury did a great job, and the hill was perfectly prepared. I am very happy that we have the competitions on the big hill next weekend."

The next event for the ladies will be the World Cup in Oberstdorf (GER) next weekend, then it will be time for the Nordic WSC in Seefeld (AUT).