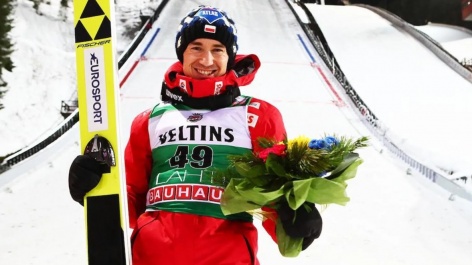 After Stoch took his first win this season last Sunday in Oberstdorf, the 31-year-old followed up on this performance today and claimed his 33rd World Cup win. In his current shape, Kamil Stoch is one of the top contenders for the World Championship titles at the Nordic WSC in Seefeld (AUT) starting ten days from now.

"It was a very good competition for me and I’m really happy about my good jumps. After the team competition, we analyzed everything with the coach, because I felt like there was something missing in my jumps. We managed to find a solution that luckily worked for me. Maybe I needed a day like yesterday, that would shake me a bit. Today’s good trial jump really helped me to see if everything is fine and our solution really works. Then during the competition, I just tried to do the same and I succeeded", Stoch analyzed his win after the competition.

Ryoyu Kobayashi posted convincing jumps again and defended his clear lead in the overall World Cup with the second place today. "Today was a lot of fun, my jumps were really good and I liked that. I try to focus totally on the competitions - that’s the secret of my consistently good shape", said Kobayashi, who was on the podium in 14 competitions this winter. Kazuyoshi Funaki is the only Japanese jumper with more podiums in a single season with 15. Noriaki Kasai also has achieved 14 podium finishes in one season.

The weekend in Lahti ended on a high note for the Norwegian team of Alex Stoeckl. After two injured jumpers following crashes and the ninth place in yesterday's team event, three Norwegians finished in the Top 7 today. Halvor Egner Granerud was fifth, Johann Andre Forfang seventh and Robert Johansson was happy about his third place. "It was a good competition for me. For years I have been struggling with the inrun here, but today I finally managed to make a step in the right direction and that felt good. I feel like I have been in a solid shape lately, I'm just lacking the consistency and that’s my current goal. I try to be patient, trust in what I’m doing during training and try to do the same during the competition", said Johansson.


Best German was Karl Geiger in sixth. Martin Hamann, Stephan Leyhe and Richard Freitag finished 15th, 16th, and 19th. Andreas Wellinger and Constantin Schmid were 32nd and 33rd and failed to make the cut for the final round of the best 30.

The conditions were difficult in Lahti on Sunday, some luck was necessary in order to achieve a top result. For example, Stoch's teammate Dawid Kubacki didn't really have a chance today. The conditions were very bad during his second jump and so Kubacki, who was ninth after the first round, finished only 28th overall.

Ryoyu Kobayashi remains in the lead of the overall World Cup ranking with 1460 points. Kamil Stoch (1029 points) and Stefan Kraft (967 points) follow in second and third.

The Ski Jumping World Cup continues next weekend in Willingen, where three competitions will be held.