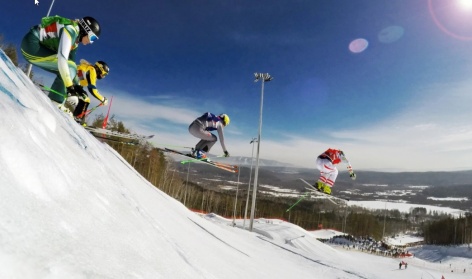 Sunny Valley (RUS) - After a pair of thrilling races in Feldberg (GER) wrapped up on Sunday, it was a quick pack of the bags and back up in the sky for the Audi FIS Ski Cross World Cup tour as athletes, coaches, and crew made their way to Sunny Valley in Russia’s Chelyabinsk region where four days of competition are lined up for this week, with qualifications on Thursday and Friday, and back-to-back days of finals on Saturday and Sunday.

Sunny Valley has been a highlight stop on the ski cross World Cup tour since its inaugural turn as a venue back in 2016/17, boasting a challenging course, huge crowds, and crowns of real gold for both the top ladies’ and men’s athletes of the weekend.

While Fanny Smith (SUI) continues to lead the ladies’ 2018/19 SX World Cup standings (as she has since the first event of the season), Sweden’s Sandra Naeslund closed the cap considerably by winning each of the two competitions last weekend in Feldberg, putting the 22-year-old Swede’s 550 points just 13 points back of Smith’s 563.

Smith and Naeslund each walked away from Sunny Valley with a victory last season, making this year’s showdown in Russia even more intriguing with the two athletes so closely matched at the top of the standings, and just one more race left after Sunny Valley at the World Cup finals in Veysonnaz (SUI).

However, also still in striking distance of this year’s ladies’ ski cross crystal globe is Marielle Thompson (CAN), with the Utah 2019 world champion sitting 93 points back of Smith with 470 points. Though she would need a fortunate combination of strong results for herself and struggles for her competitors to win this years title, it is not out of the question for Thompson.

Others to watch out for on the ladies’ side include Sanna Luedi (SUI), Brittany Phelan (CAN), and Alizee Baron (FRA).

The men’s Audi FIS Ski Cross World Cup was thrown for a loop this weekend in Feldberg with a slew of podiums for some lesser-known names on the circuit, including a victory and a runner-up for Ryan Regez (SUI) for his first two career podiums, the first World Cup podium for Florian Wilmsmann (GER), and the third career podium for Romain Detraz (SUI).

Despite all this, the name at the top of the game remains the same, as Bastien Midol of France maintains his place well atop the World Cup standings with 496 points, putting him 113 points ahead of teammate Jean Frederic Chapuis.

While Chapuis won the second race in Feldberg in an impressive fourth-to-first performance that reaffirmed the brilliance of the winningest men’s ski cross World Cup athlete of all-time, the three-time crystal globe winner will be hard-pressed to catch Midol with just three races left in the season. Still, expect the 29-year-old Chapuis to at least make things interesting this weekend.

Just back of Chapuis on the rankings is Alex Fiva (SUI), as the 33-year-old veteran continued to impress last weekend with a fourth and a sixth-place finish in Feldberg - though the fourth-place finish came as a result of Fiva receiving a yellow card that dropped him out of third and off the podium.

Canada’s Kevin Drury, who claimed his first career victory at Sunny Valley last season as well as a runner-up result, Jonas Lenherr (SUI), who matched Drury with a win and runner-up at last season’s Sunny Valley competitions, Brady Leman (CAN), and the hotshots Regez and Wilmsmann should all be ones to watch this weekend as well.

Both Thursday and Friday’s qualification rounds at Sunny Valley are slated to begin at 11:15 local time, while Saturday and Sunday’s finals are both scheduled to start at 13:00.