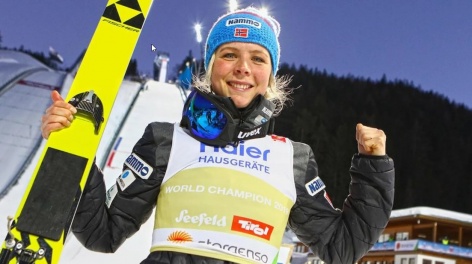 Maren Lundby won the ladies' individual competition in Seefeld with 106.5 m and 104.5 m and 259.6 points ahead of Katharina Althaus (259.1 points) and Daniela Iraschko-Stolz of Austria (247.6 points). The Olympic Champion from Norway only had a lead of 0.5 points over Althaus after an extremely exciting final.

It was a true nail-biter for the ladies today, the great event will be remembered for a long time by athletes and spectators alike. With the final jump of the competition, Maren Lundby raised the excitement level, because the 25-year-old's second jump was not as good as she had wished. In the end, she defended the tiny lead of 0.5 points and came in ahead of Katharina Althaus. "I was looking forward to this event for the whole year. The fact that it was so close made it even more exciting and better. I almost feel a bit sorry for Katharina. I knew what I had to do today. My jumps weren't perfect, but I'm extremely happy that it was enough to win the title", Lundby explained after claiming her first WSC title. Lundby is also the first Norwegian World Champion in ladies' Ski Jumping.

Katharina Althaus could dream of winning the title until the very end. After the final jump of Lundby, it seemed as if the Norwegian would not be able to finish on top. "When I stood at the leader's board after Maren's jump, I was hoping that it would be enough. But I'm also happy about the silver medal. Maren is jumping very well", said Althaus, who also came in second behind Maren Lundby at the Olympic Games in PyeongChang.

Veteran Daniela Iraschko-Stolz of Austria moved up from eighth after the first round to third overall with a great second jump. Iraschko-Stolz explained: "In the second round I knew that I'll either go far or I'll land at 60 m. Usually, this doesn't work, but today I had luck on my side. This medal is very important, I had no energy due to pneumonia recently."


Juliane Seyfarth closely missed the podium. Seyfarth was third after the first round, but in the final, she lost too many points compared to Daniela Iraschko-Stolz and so she had to be satisfied with the fourth place.

Eva Pinkelnig and Sara Takanashi achieved top results in fifth and sixth, even if more would have been possible for both today. The two Slovenes Nika Kriznar and Ursa Bogataj also showed strong performances and finished seventh and eighth.

The final competition for the ladies will be the mixed team event on Saturday (4 pm CET).