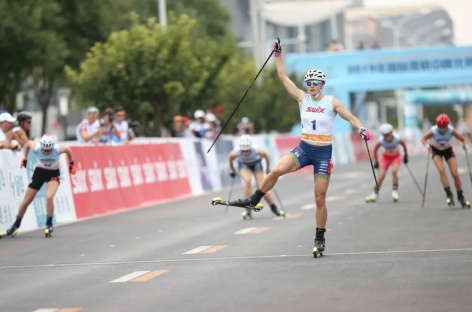 Temperatures soared during the first event, a 1500m sprint in free technique, but Linn Sömskar (SWE) and Klæbo (NOR) remained cool to take their first victories. Anikken Gjerde Alnæs (NOR) and Moa Olsson (SWE) raced to second and third place on the women’s side and Ragnar Bragvin Andresen (NOR) and Aleksander Dyrberg Ek (NOR) took second and third on the men’s side.

The second day, the event featured the 200-metre super sprint in cooler and overcast conditions. However, right on time for the semi-finals, a strong rainstorm hit the field. Nevertheless, it was Klæbo and Sömskar who took the top spots again. Norway's Jostein Olafsen and Julie Henriette Arnesen recorded the fastest time in qualifying.

The event at the famous Beijing Olympic Park, the first staging of a FIS Roller Ski World Cup in China, concluded with a 15 / 20 km Mass Start race on the third day. Sömskar made it three out of three by beating Anikken Gjerde Alnæs (NOR) and Alena Prochazkova (SVK) to the victory, while the men’s race had a very exciting sprint the finish resulting in the first Chinese winner with Qiang Wang, who shared the winning time with Ragnar Bragvin Andresen (NOR) and Victor Gustafsson (SWE), all finishing in exactly 51:28.5.

The first day of competition was watched by 9 million viewers on Beijing TV and reached a market share of 3%.

Ding Dong, Deputy Director of the Winter Sports Administrative Centre at the General Administration of Sport of China, called it a rare opportunity to organise such a high-level roller ski event at home. "It is important for us to run competitions combining professional events with public participation, so that the general public can enjoy the arena. This will encourage more people to develop an interest in roller skiing and winter sports," said Dong.

FIS Secretary General Sarah Lewis was also on location to witness the event. She added: The first FIS Roller Ski World Cup in China has been a resounding success and another important milestone for building experience in preparing for the Beijing 2022 Olympic Winter Games. The organisation was first class and the interest in China is growing with each international event. The Chinese Ski Association are working very hard to develop their athletes too and this first victory and a number of strong placings in the races shows they are heading in the right direction"