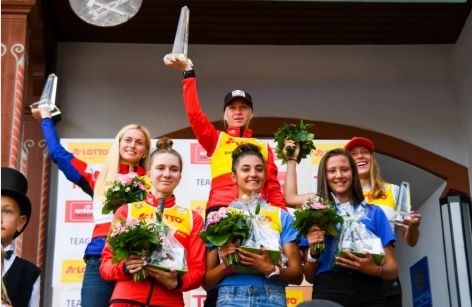 Gyda Westvold Hansen won the last event of the women’s Summer Grand Prix 2019 in Oberhof. The Norwegian crossed the finish line 9.2 seconds ahead of Russia’s Stefaniya Nadymova, who capitalised on the disqualification of Summer Grand Prix leader Tara Geraghty-Moats to take the overall victory of the 2019 FIS Summer Grand Prix.

Nadymova had shared the intermediate lead after the jumping part with Westvold Hansen. Both women scored 109.4 points and went out on the track together. Italian Veronica Gianmoena was second with a total of 104.5 points (94 m) and had a 20-second delay to make up to the leading duo at the start. Thea Minyan Bjørseth was fourth (+0:23) and Germany’s Jenny Nowak started into the race with a delay of 36 seconds.

In the race, the two leaders started together and skied together in the packed centre of Steinbach-Hallenberg for the first lap. On the second lap, the Norwegian attacked and Nadymova could not follow her, so a 8.4 second gap had opened by the 3.4 km point. The gap grew marginally more until the finish line but Westvold Hansen and Nadymova were uncontested for their first two places.

In third place, Veronica Gianmoena battled with Jenny Nowak for her first podium spot of the summer and prevailed in the end. About five seconds separated the two at the finish line. Anastasia Goncharova claimed rank five, Marte Leinan Lund was sixth.

In the final standings (excluding all athletes that did not start in all events, as per Summer Grand Prix rules), Stefaniya Nadymova won with a 20-point advantage ahead of Tara Geraghty-Moats (USA). Jenny Nowak was third (230 points), Anastasia Goncharova fourth, Veronica Gianmoena fifth and Annika Sieff sixth.