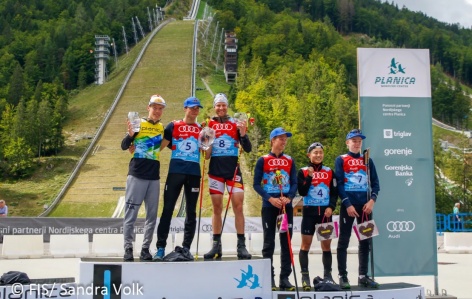 Jarl Magnus Riiber returns with a win in Planica

Once more, Rehrl showed his class on the jumping hill and earned a narrow 5-second lead on Norway’s Espen Andersen. Rehrl’s 129.5 metres (132.1 p.) were enough to beat Andersen’s 132.5 m (130.9 p.) in better conditions. One second later, Rehrl’s teammate Christian Deuschl started the race. Deuschl had laid the foundations for this good starting position with a 132 metre jump and a point total of 130.6.

Japanese youngster Kodai Kimura shone with an early 135 metres with bib 2. The longest jump of the day earned the Japanese 128.4 points and the intermediate rank four. World Cup overall winner 2018/19, Jarl Magnus Riiber started his first summer competition 2019 from position five, +0:15 behind Rehrl and was definitely an athlete to watch on the track.

Also Austrian veteran Bernhard Gruber returned strong in his first competition of the summer. He jumped to 129 metres and started his race from position eight, +0:34 after teammate Rehrl. In total, 14 athletes started within the first minute, among them Samuel Costa, runner-up in the overall standings 2019 with position 14 and a +0:58 delay.

Franz-Josef Rehrl’s lead in the race had melted away by the 2.8 km point of the race and he formed a leading group together with Christian Deuschl, Espen Andersen, Jarl Riiber and Kodai Kimura. Out of this group, Christian Deuschl was the first one to drop out and the rest continued as a foursome until the second-but-last lap when pursuers Jens Lurås Oftebro and Bernhard Gruber caught up.

In the end, Jarl Riiber’s finish sprint seemed to be irresistible and he claimed the first win in his first competition of the season. Franz-Josef Rehrl hung on until the last metres and claimed a secure second place, followed by teammate Bernhard Gruber. Espen Andersen salvaged a fourth place by finishing +6.5 seconds after Riiber and young Japanese Kitamura created a small sensation by claiming the fifth place. Jens Lurås Oftebro (NOR) was sixth.