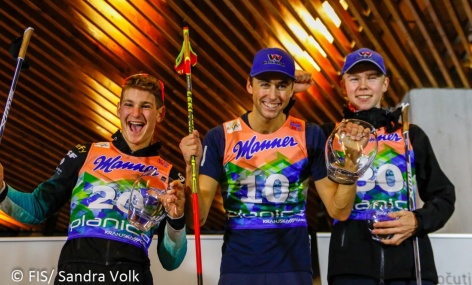 After his disqualification yesterday, Espen Bjørnstad (NOR) returned strong and won the jumping round with 135 metres (139.1 p.). Teammate Jens Lurås Oftebro had position two on the start grid with 135.5 m and 131.7 points and started 30 seconds after Bjørnstad. He was followed by Lukas Greiderer (AUT) who left the start eight second later after an 132.5 metre jump and 129.5 points.

Yesterday’s fourth-placed Espen Andersen conquered the same position for the start of the cross-country race with a delay of +0:39 seconds, followed by Christian Deuschl at +0:40 and Daimatsu Takehana and Ernest Yahin with +0:44 and +0:45.

Jarl Magnus Riiber ranked only eighth after the jumping part but with a delay of 49 seconds, he was still not out of the game for the top positions of the day. Antoine Gerard was the last athlete starting within the first minute with +0:59 and was battling Samuel Costa, Fabian Rießle and Laurent Muhlethaler for the overall podium of the summer. Costa had to contend with a disadvantage of +1:35, Rießle +1:42 and Muhlethaler +1:32.

Intermediate leader Espen Bjørnstad had to ski alone for the first part of the race but before the 4.7 km point, his pursuers had caught up with him: Jarl Riiber, Lukas Greiderer, Espen Andersen and Jens Lurås Oftebro formed a bigger leading group with Antoine Gerard gunning to close the gap as well. At the halfway point of the race, the Frenchman had completed his task and from this point on, the six men skied together until the decisive phase of the race in the last lap.

In the end, Riiber’s acceleration could again not be matched by any other athlete of the group and so last winter’s dominator claimed his second victory in as many days in Planica. Antoine Gerard was strong behind Riiber and stormed to rank two, which also gained him the third spot in the overall ranking and 3.570 CHF of extra prize money. Espen Andersen was narrowly beaten in a final sprint by youngster Oftebro. Lukas Greiderer finished fifth and Espen Bjørnstad had to let go of the five other men in the end phase of the race and came in sixth. Fast skiers Fabian Rießle and Jørgen Graabak were seventh and eight and Samuel Costa and Jan Vytrval completed the Top Ten.

Franz-Josef Rehrl also claimed the win the Best Jumper Trophy (462 points), while Raffaele Buzzi stormed to the win in the Best Skier Trophy (479 points) with the fastest time of the day.