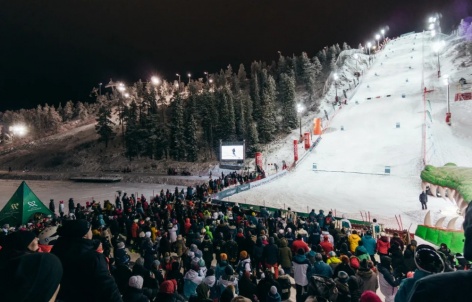 The FIS Freestyle Ski World Cup season is just around the corner and we’re now just four weeks away from the first moguls World Cup competition of the 2019/20 season slated to go down in Ruka (FIN) on December 7.

It will be the tenth consecutive year that will see the world’s best moguls skiers descending to Ruka for the season’s opening event, and the Finnish resort located not far away south from the Article Circe has consistently delivered a top-notch venue and an exciting competition year after year.

And this season, while celebrating a round anniversary, we can expect nothing else but another extraordinary show under the lights and a thrilling kick-off to what’s expected to be an interesting World Cup campaign.

The 2018/19 World Cup champions Perrine Laffont (FRA) and Mikael Kingsbury (CAN) will be on hand in Ruka ready to defend their last season’s victories. The competition will be strong, however, with at least a handful of athletes looking to upset the favourites on the “Battery Run” course. With the likes of Jakarta Anthony (AUS), Jaelin Kauf (USA) or Yulia Galysheva (KAZ) on the women’s side, as well as Ikuma Horishima (JPN), Matt Graham (AUS) and Ben Cavet (FRA) dropping in in the men’s event, it’s anyone’s game once the competition goes down on Saturday, December 7.

Apart from the annual season’s opening in Ruka, the 2019/20 moguls World Cup tour will visit 8 more venues spread all over Asia, Europe and North America for a total of 13 competitions, including five dual moguls events.

From Ruka, the tour will travel to Thaiwoo (CHN) for two more competitions just before the holidays break. Tremblant (CAN) will host the first event in 2020 on January 25, with six more competitions coming up in February in Calgary (CAN), Deer Valley (USA), Tazawako (JPN) and Almaty (KAZ). Entering the final part of the season in March, the tour will travel to Krasnoyarsk (RUS) and Idre Fjaell (SWE), with both venues hosting the moguls World Cup competitions for the very first time.