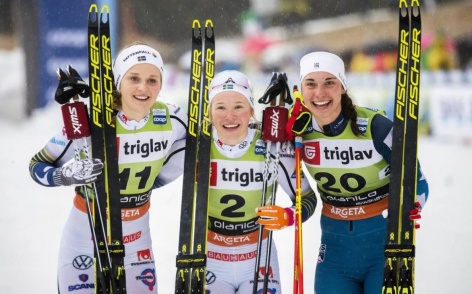 Despite ongoing rainfall and passing on the outruns of a thunderstorm, the spirits for the Sprint F competitions were high today in the Nordic Center at Planica (SLO).

Due to warm weather ahead of the FIS Cross-Country World Cup, the snowy tracks in Planica saw the snow melting away. Thanks to snowfarming possibilities, the World Cup tracks could be ensured. For the reason to preserve the courses however, the training times of Friday and Saturday were cancelled. The athletes could only set foot on the course shortly before the Sprint qualifications. «The conditions are actually quite alright and I dont mind the rain. It’s not the first time that we have to ski in these conditions», said Johanna Hagstroem from Sweden after her prolog run which she finished in 4th position behind Nadine Fähndrich (SUI), Jonna Sundling (SWE) and Laurien van der Graaff (SUI).

At the quarter finals the FIS Cross-Country family experienced Slovenian alpine weather at its best with a mixture of snow and rain and just before the womens semi finals, the race had therefore to be interrupted in order to let the outrun of a thunderstorm pass by.

Despite the lack of snow, the course in Planica left enough space for the competitors to fight for the top-spots. An unfortunate fall of Maiken Caspersen Falla and Ane Appelkvist Stenseth in the semi finals caused an opportunity for Jonna Sundling and Linn Svahn to pull through into the finals. With Stina Nilsson also qualifying for the finals, the Swedish success story continued. Another ace ready to be played was also waiting in the US Team with Sophie Caldwell and Julia Kern lining up. Annamarija Lampic was cheered on by the Slovenian crowd as the womens final heat went out. The Swedish duo Nilsson and Sundling took the lead in this final chapter of todays crazy Sprint day and sprinted ahead to Nilssons 24th World Cup victory and Sundlings 6th podium spot on second place (+0.22). The final stretch towards the finish line decided about the last remaining podium spot which Julia Kern decided to her favor before team colleague Sophie Caldwell. Kern wins her first World Cup podium +0.79 seconds behind Stina Nilsson.