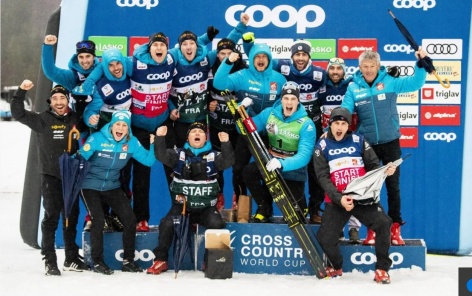 It was a tough start into the Sprint competition weekend in Planica (SLO). But despite ongoing rain and a lack of snow the competition field was excited about the upcoming challenge. Cross-Country is a true Outdoor sport and the achievements of todays Sprint proved that once more.

After the qualification, Sindre Bjornestad Skar stated that the course was well prepared despite the little amount of snow but the visibility was difficult due to the rain. He had the tactic laid out to defend at least a top-3 spot during the heats in order to stay ahead and not get drifted off the track. Skar finished the qualification on the third spot after Federico Pellegrino (ITA) and Lucas Chanavat (FRA).

At the quarter finals the FIS Cross-Country family experienced Slovenian alpine weather at its best with a mixture of snow and rain and just before the womens semi finals, the race had therefore to be interrupted in order to let the outrun of a thunderstorm pass by.

With a calm, steady and powerful performance, Lucas Chanavat was playing his cards well today. He led through the heats despite being challenged by Federico Pellegrino who energetically used the two final uphills to ensure top spots for the upcoming heats. The mens final was therefore also influenced by their competitive mode, keeping the pace high.

With Erik Valnes and Sindre Bjoernestad Skar chasing them, Chanavat had to push trough to the end – ensuring him his long awaited first World Cup victory! Pellegrino finishes second +0.4 and Valnes takes the third spot, +0.83 behind.