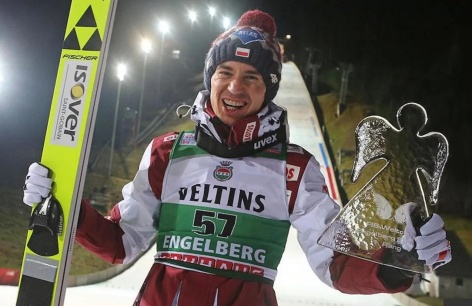 After the entire area around the hill in Engelberg was closed down by the police yesterday due to the strong wind, athletes and spectators experienced a high-caliber competition in perfect conditions on Saturday.

And, after this season didn't go as he wished so far, Kamil Stoch presented himself in top shape in Engelberg, where he already won in 2013. "I like this hill, I like the town, I really like the atmosphere here in Engelberg and I always enjoy coming here. Of course, this makes it even better for me to win here. When you are up at the start you can tell from the reaction of the fans if the others were jumping far. But you just have to remain focused on your jump", explained Stoch, who is now among the top contenders for the 4-Hills-Tournament.

For the three-time Olympic champion this was the 34th World Cup win, the first since February 2019 in Lahti. With this win, Kamil Stoch is now fifth in the all-time ranking. Only Gregor Schlierenzauer (53), Matti Nykaenen (46), Adam Malysz (39), and Janne Ahonen (36) won World Cups.


The second place went to Stefan Kraft, who achieved his third podium finish in a row. With this result, Kraft also took the yellow bib of the overall World Cup leader. He now leads in this ranking with 356 points, followed by Japan's Ryoyu Kobayashi (fourth today) and Karl Geiger.

"The second jump was amazing, the entire competition was really cool. After my jump in the qualification, I already knew that it's going well for me today. Hopefully, the weather will remain the same and we can have another great competition tomorrow. The motto for tomorrow is: Attack", said Kraft, who is already looking ahead to Sunday's competition.

Karl Geiger of Germany came in third. He said after the competition: "The conditions were incredibly good today and so it was a lot of fun. The air is a bit thinner here in Engelberg and so you need to have a strong take-off. It was a relaxed day today, the hill was perfectly prepared. Kamil Stoch and Stefan Kraft were jumping extremely well and so I congratulate them on their performances", told Geiger, who is currently the only German hope for the upcoming 4-Hills-Tournament.

The jumpers from Norway presented themselves very strong today, even if they had no one on the podium: Marius Lindvik, Johann Andre Forfang, and Robert Johansson came in fifth, sixth and ninth.