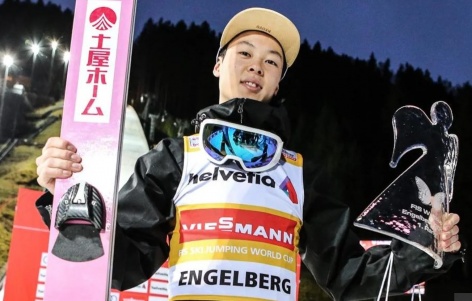 Sunday's competition in Engelberg will not win a beauty award: the temperatures were clearly too high for this time of year, and with wind and rain it had about everything that ski jumpers don't want during a competition. But in the end, it still was an exciting competition on a high-level with that ended with the well-deserved win of Japan's Ryoyu Kobayashi.
This was his 15th win in the World Cup, the second one this winter.

"It was a very difficult competition for all of us, but I had a good jump in the final round. I'm happy that I could be on the podium and I would like to thank the organizers and everyone involved for making the competition happen today", said last year's 4-Hills-Tournament winner who proved that he has to be reckoned with again this season.

"It was not an easy competition because of the wind conditions. I’m very happy that I managed to remain focused. I showed two good jumps today and I’m very happy with the second place. To be honest, I was just waiting, patiently, for results like this one. I showed good jumps in training and in the qualifications this season, I was also third in Ruka before the DSQ. I was close to the top all the time and finally, the reward is here", said Peter Prevc, after he finished in the Top 3 for the first time this season.

21-year-old Austrian Jan Hoerl claimed his first World Cup podium today. "This means so much to me, it was very difficult and I had luck on my side today. I didn't worry about the wind, I never do. I just do my job and then I'll see the result. I will drink a few beers over the holidays, but we travel to the 4-Hills-Tournament already on the 27th so I won't eat too many cookies", Hoerl explained after the competition. His best result so far was the ninth place in Ruka earlier this season.

Karl Geiger top again
With his fourth place today, Karl Geiger once again proved his top position within the German team. Geiger is the only German jumper who is among the top favorites for the upcoming 4-Hills-Tournament.
Besides Geiger, Stephan Leyhe (10th) and Pius Paschke (13th) also did a very good job today.

Kamil Stoch best Pole
Yesterday's winner Kamil Stoch was the best Pole today in ninth. Stefan Hula was the only other athlete of the team of head coach Michal Dolezal who made the cut for the second round.

Moment of shock for Kraft
Stefan Kraft had a moment of shock when he fell in the final round after the landing Fortunately he didn't sustain any injuries, but he lost the chance to finish among the very best again. The 26-year-old Austrian came in 18th and lost the "Yellow Bib" of the overall World Cup leader to Ryoyu Kobayashi.
After the second competition in Engelberg, Kobayashi leads the overall ranking with 440 points ahead of Stefan Kraft (369 points) and Karl Geiger (347 points).

Successful day for USA, Canada, and Kazakhstan
Mackenzie Boyd-Clowes (CAN) in 17th, Kevin Bickner (USA) in 22nd and Kazakh Sergey Tkachenko in 24th seized the opportunity today and scored valuable world cup points. For Bickner and Boyd-Clowes, who train together, this was the first time that they could also score points together.

The Ski Jumping World Cup continues on December 28th with the qualification for the opening event of the 4-Hills-Tournament in Oberstdorf (GER).