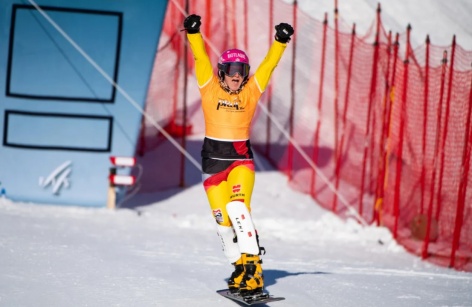 Hofmeister and Sobolev victorious in Scuol

The FIS Snowboard Alpine World Cup was back in action on Saturday for its first race of 2020 taking to the slopes of Switzerland’s Scuol resort - arguably the riders’ favourite venue on the entire tour. After an exciting day of racing under blue skies it was Germanany’s Ramona Theresa Hofmeister and Russia’s Andrey Sobolev claiming victories, kicking off the new year on a high.

For the third straight year, the Swiss Alps resort of Scuol located in the Egadin region hosted the snowboard alpine World Cup event and once again the organisers were up to the task, providing a perfectly prepared course while Mother Nature provided the perfect weather. With such everything in place for an excellent contest the world’s best alpine snowboarders pushed it to the limit all day long, and once again the event in Scuol proved to be a big success.

On the women’s side Ramona Theresia Hofmeister showed she’s clearly on top of the game right now, taking her third straight World Cup victory (all in PGS), while besting the likes of Julie Zogg (SUI), Melanie Hochreiter (GER) and Milena Bykova (RUS) on her way to the big final.

Then in the big final Hofmeister once again proved her incredible form against the World Cup rookie Sofia Nadyrshina (RUS), leaving no doubt who was the fastest women on track in Scuol this Saturday.

With the victory in Switzerland, Hofmeister added another 1000 points to her World Cup ranking, slowly but surely becoming the mid-season favourite to clinch the PGS crystal globe at the end of the season. After three competitions Hofmeister has over 1500 points advantage over second-ranked Ladina Jenny - with 3000 points for three victories to Jenny’s 1420 points.

Second place on the day went to 16-year-old Nadyrshina, who came through with something of a surprisingly solid performance, taking her career’s first top-3 finish in just her fifth World Cup start.

Another Russian athlete Milena Bykova rounded out the women’s podium in third place after winning the small final heat against Melanie Hochreiter, with the Russian earning her first World Cup podium of the season.

The level of riding was up to the ceiling also on the men’s side of the event, with tight heats the norm throughout the day. At the end of the day it was Andrey Sobolev who managed to outrun all of his competitors - including PGS World Cup leader Roland Fischnaller (ITA) in a quarter-final round winning by the slightest of margins, crossing the line in almost a dead heat with the Italian rider.

In the big final against Benjamin Karl (AUT), Sobolev kept it cool despite loosing some ground at both intermediate times, overcoming the Austrian veteran shortly before crossing the finish line, to take his first victory of the season.

Karl finished the competition in second place for his second top-3 finish in 2019/20 campaign, while Oskar Kwiatkowski (POL) and Dario Caviezel (SUI) tied for the final spot on the men’s podium after a thrilling toe-to-toe small final heat.

Kwiatkowski earned his career’s second World Cup podium, while Caviezel made a strong come back in his first World Cup race after a surgery on his right knee in September 2019.

In the PGS World Cup standing Rolland Fischnaller kept his lead over his rivals with 2360 points after three races. With 800 points for his second place on Saturday Benjamin Karl jumped in second place with a total of 1720 points.

The FIS Snowboard Alpine World Cup will now travel to Austria’s Bad Gastein, where the second PSL of the season is set to go down in just three days time on Tuesday, January 14, and the first Parallel Slalom Team event following up on Wednesday, January 15.