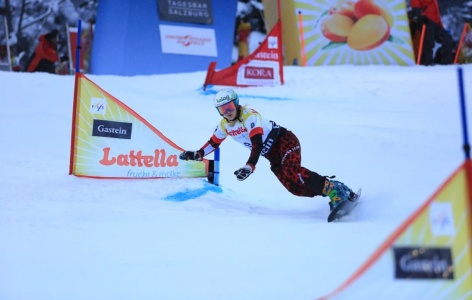 Just three days after an exciting PGS competition in Scuol, the FIS Snowboard Alpine World Cup is right back to action, moving over to the legendary venue in Bad Gastein (AUT) for nighttime parallel slalom competition on Tuesday and PSL mixed team competition on Wednesday.

This year Bad Gastein will be hosting the 20th edition of its snowboard alpine World Cup event, with the first competition in the high valley of the Hohe Tauern mountain range dating back to 2000/2001. It’s the longest-running competition of any of the entire FIS Snowboard World Cup and once again this year we can expect that the Austrian stop on tour will be one of the highlights events of the 2019/20 season.

Tuesday’s competition under the lights will be just the season’s second PSL race, with Julie Zogg (SUI) and Andreas Prommegger (AUT) leading the respective women’s and men’s PSL standing after opening the 2019/20 campaign with big wins in Bannoye (RUS). However, that was back at the start of December, and since then we’ve seen a handful of PGS competitions go down, with several other athletes establishing themselves as the ones that should be on everyone’s radar when looking for favourites for the win in Bad Gastein.

Starting on the women’s side keep an eye on Selina Joerg (GER) and Patricia Kummer (SUI), last season’s number two and three in parallel slalom. Going further down the list let’s not forget about Claudia Riegler (AUT), as the 46-year-old veteran will be looking to repeat her last year’s victory on the venue in Bad Gastein; with already two podium to her record in 2019/20 it’s very likely we will see Riegler in the mix again on Tuesday.

Certainly we could not leave out Ramona Theresia Hofmeister (GER), who has three victories so far this season to lead the overall parallel World Cup standings. Ladina Jenny (SUI), or Daniela Ulbing (AUT).

And, finally, we look to the two-sport phenom Ester Ledecka (CZE). Ledecka is finally making her 2019/20 FIS Snowboard World Cup season comeback after spending the first couple months of the season racing on the FIS Alpine Ski World Cup, with a number of impressive results that include a huge victory in Lake Louise (CAN) downhill race to open the campaign.

Moving over the the men’s side of the event, apart from aforementioned Prommegger, also count on another fans’ favourite Benjamin Karl (AUT). Similarly to his teammate Riegler, Karl will be entering Tuesday’s competition with just one goal in his mind - to defend his last year’s victory in front of the home crowd.

Then we have a strong Italian squad with Aaron March and Maurizio Bormolini, currently sitting in corresponding second and third spot in 2019/20 PSL ranking, as well as Rolland Fischnaller - the overall parallel World Cup leader, who was there in Bad Gastein back in the 2000/2001 season and this winter will be dropping in on his 20th PSL World Cup competition at the venue.

With the likes of Stefan Baumeister (GER), last year’s overall PSL winner, as well as Dario Caviezel (SUI), Andrey Sobolev (RUS) and Sangho Lee (KOR) all very likely to showcase their best carving skill on Tuesday night, the men’s completion shapes up to be a thrilling one.

Once the individual competition wrap up on Tuesday night, Wednesday will bring the first Parallel Slalom Mixed Team event of the season. And while it’s yet to see how nations will set up their teams ahead of the first race in 2019/20, it’s hard not to put the home nation among strong candidates for victory.

Austria has won four previous team competitions on home soil in Bad Gastein, with Ulbing and Karl claiming top spot in each of last season’s three PSL team events to clinch the 2018/19 World Cup crystal globe. Still, as in previous years, they will have a strong competition with teams from Italy, Switzerland, Germany and Russia doing their best to upset the favourites.

Tuesday’s individual PSL competition will kick off at 14:30 CET with the qualification round, and the evening finals at 18:40. Wednesday’s PSL Mixed Team finals will go down at 13:00. The event can be watched live on ORF 1 and ORF Sport + as well as on Eurosport 2 and through Eurosport player.