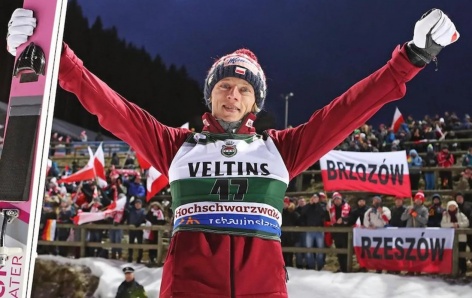 Dawid Kubacki was the happy winner on the second day of the World Cup in Titisee-Neustadt. In difficult wind conditions, the Pole jumped on 143 m and 133.5 m (283.3 points) and came in ahead of Japan's Ryoyu Kobayashi and Slovenia's Timi Zajc.

Unlike yesterday, the wind conditions on the Hochfirst-hill were changing a lot on Sunday and forced the jury to interrupt the competition various times. But still, the 7000 fans at the hill saw an extremely exciting competition. Especially the duel between Dawid Kubacki and Ryoyu Kobayashi was a nail-biter.

In the end, the winner Kubacki and the second-placed Kobayashi could celebrate. Kobayashi was only 0.3 points (283.0 points) behind Kubacki today, and so he could claim the overall win of the "Titisee-Neustadt 5" and the prize money of € 25'000.- with a lead of 5.4 points over Kubacki. The third place in this overall ranking went to Germany's Stephan Leyhe.

Today's win was the eighth podium in a row for Dawid Kubacki, this proves the impressive consistency of the 29-year-old. "Of course it's always nice to win, but honestly I'm not completely satisfied with my second jump, it was not really good. On the other hand, it's also good that I could win even with such a jump", Kubacki told after the competition. And also Ryoyu Kobayashi was satisfied with today's outcome: "I'm happy that I could show really good and stable jumps here. The conditions were quite difficult, sometimes it was snowing and the wind was also changing a lot."


The third place in today's competition went to Slovenia's Timi Zajc. "I'm very happy that I could be on the podium today. It was a difficult competition because of the wind so I'm happy that I had two really good jumps. I'm not sure how the wind conditions influenced my jumps, but it was difficult", the 19-year-old said after his third World Cup podium.

Stephan Leyhe and Karl Geiger in fourth and fifth achieved good results for Germany, even if the team could not finish on the podium in front of the home crowd. Constantin Schmid finished in a good ninth place.

Anze Lanisek was sixth and so it was also a good day for the Slovenian team of head coach Gorazd Bertoncelj. Best Norwegian was Marius Lindvik in tenth, Stefan Kraft was the best Austrian in 11th, followed by his teammate Philipp Aschenwald in 12th.

After this double victory for Dawid Kubacki, the World Cup in Zakopane (POL) comes at the perfect time. Two competitions will be held in this cauldron next weekend, a team event on Saturday and an individual competition on Sunday.